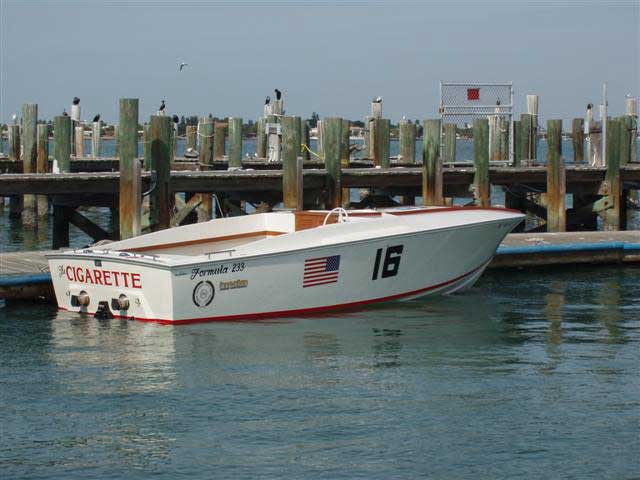 The premier site for owners of the famous 233.

The 233 was Aronow's first boat under the Formula name. It was designed by Jim Wynne. This was Aronow's first race boat and in collaboration with Jim Wynne and Walt Walters they founded the Formula Boat Company. This was in 1962. I think they Aronow won the Miami Nassau race in the 233. The 233 went on to win a number of offshore races while Aronow went on to found Cigarette, Magnum, Donzi and USA Racing. Aronow was murdered in 1987 by a rival boat builder.

The following was taken from Wikipedia:

Donald Joel Aronow (March 3, 1927 - February 3, 1987) was an American designer, builder and racer of the famous Cigarette, Donzi, and Formula speed boats. He built speedboats for the His Imperial Majesty Shah of Iran, Charles Keating, Robert Vesco, Malcolm Forbes, and George H. W. Bush. President Lyndon Johnson - in retirement - owned several 16 ft. Donzi speedboats on his Texas ranch with which he would race his Secret Service agents. Having made his money in the construction business in New Jersey in the late 1950s, Aronow moved to Miami in 1961 where he began racing boats for a hobby. By the end of 1962, he had formed the Formula Marine boat company which he then sold and in 1964 he started Donzi Marine. In 1966, he founded Magnum Marine with Elton Cary and, in 1970, after campaigning his "The Cigarette" around the world and winning the World Championship, he started Cigarette Racing Team using his own designs. Having sold Cigarette for the last time (after having sold it and purchasing it back in the late 1970s), he formed USA Racing Team and built the Blue Thunders, 39-foot catamarans used by the United States Customs Service to patrol U.S. waters and run down illegal offshore activities, especially drug smuggling. Aronow's close friend at the time, Vice President George Bush, was a former Cigarette owner and was involved in testing out the 39-foot cats prior to government approval. While Cigarette boats are known as the preferred speedboats among the elite, their great speed also made them a popular choice among cocaine runners. Sadly, on February 3, 1987 Aronow was murdered in his car at the end of 188th Street in Miami (the famous Thunderboat Row) where his boat companies operated . Mr. Aronow had just left from a meeting with Bob Saccenti who was part owner of Apache Power Boats together with partner Ben Kramer. Witnesses said that a powder blue Lincoln pulled next to Mr Aronow's car from the opposite direction and when Aronow rolled down his window the driver opened fire. Another witness tried to follow the Lincoln as it fled but could not catch the killer(s). The Lincoln drove over the grass to get away. Two men — Ben Kramer, a suspected drug runner who bought Aronow's USA Racing Team and was forced to sell it back to Aronow after the Customs Service refused to do business with him, and Bobby Young — eventually pleaded no contest to manslaughter related to Aronow's murder. Kramer was already in prison at the time of his plea in 1996 and is now serving a life sentence with no possibility of parole. Aronow's boats won over 350 offshore races, owned every speed record in every country at one time and he was a two-time world champion and three-time U.S. champion. He has been elected to every powerboating Hall of Fame in existence and was one of only two Americans to have ever received the UIM Gold Medal of Honor, the other being Gar Wood.

For pictures and information on Don Aronow click here.